With now a globally recognised stable economic outlook, Pakistan is on the road to becoming a regional hotspot for international trade. The country’s extremely significant geo-strategic location plays a key role in shaping the region’s dynamics. The China-Pakistan Economic Corridor (CPEC) is one of the finest examples in this regard. The friendly ties between Pakistan and China have been put to the best use as many infrastructure and energy projects are now being carried out in the region under the banner of the China-Pakistan Economic Corridor. In this blog, we are going to learn about all the latest CPEC projects in detail and discuss their regional benefits but first of all, let’s get to know a little more about CPEC itself.

MORE ABOUT THE CHINA-PAKISTAN ECONOMIC CORRIDOR

China-Pakistan Economic Corridor is a multi-billion dollar project launched as a result of a bilateral agreement signed between Pakistan and China. It’s a prominent part of the ‘One Belt, One Road (OBOR)’ initiative of China. OBOR is purposed to lay a framework of centralised trade route between Africa, Asia and Europe, interlinking over 68 countries. In Pakistan, the CPEC trade route stretches from the Himalayas in the northern region all the way to the coastline of the Arabian Sea in the south.

LIST OF ALL THE LATEST CPEC PROJECTS IN PAKISTAN

Now, we are going to enlist and discuss all the latest CPEC developments in Pakistan along with shedding light on their regional significance.

Owing to the region’s noteworthy renewable energy potential, some of the major developments to harness clean energy from natural resources in Pakistan are as follows:

The Quaid-e-Azam Solar Park is a large-scale photovoltaic power station located on the outskirts of the city of Bahawalpur in Punjab. With a total capacity of 1000 MW, this solar-powered plant spans over 500 acres (200 ha) and hosts around four hundred thousand solar modules. The project is still under construction.

Hydro China Dawood Wind Power Project is an operational wind farm as a part of the Early Harvest energy projects of China–Pakistan Economic Corridor. With an installed capacity of 49.5 MW, it is constructed on 1,720 acres of land near the city of Banbhore in Sindh around 80 kilometres east of Karachi.

Quick Fact: In collaboration with the Chinese authorities, the government of Pakistan has undergone efforts to add around 1000 MW to the energy-generating capacity of the country under the CPEC’s Early Harvest scheme between 2018 and 2020.

With a power generation capacity of 99 MW, United Energy Pakistan (UEP) Wind’s project was launched in June 2017. The wind farm is located in Jhimpir. This construction of the cost has been carried out at a cost of around US $250 million. It is one of the most significant CPEC projects in Pakistan. The project was developed and made operational in a short period.

The Karot Hydropower Project can be defined as a run-over-river rockfill gravity concrete-core dam. It is one of the major under-construction dams in Pakistan. The dam has an installed power generation capacity of 720 MW. Known as the first investment project of the Silk Road Fund, The Karot Hydropower Station is part of China–Pakistan Economic Corridor, which is expected to be completed by 2021.

Some of the major infrastructure CPEC projects include the construction and expansion of the network of motorways in Pakistan. Let’s take a look.

The Thakot to Havelian section of the Karakoram Highway is planned to run 118 kilometer as a 2-lane highway. The highway project is also known as the second phase of Karakoram Highway. Several modern tunnels are being constructed along with the project, which will effectively bring down the time it takes to cover the distance between Islamabad and Mansehra to five hours.

Multan-Sukkur Motorway (M-5) is one of the key sections of the proposed Karachi-Peshawar Motorway. M-5 accounts for 392 kilometres of the 1,100-kilometre project. It is a 6-lane road featuring 11 interchanges at different points throughout its length.

The project is located in the Khuzdar District of the province of Balochistan. The project is a 2-lane highway, which covers a distance of 113 kilometres from Basima to Khuzdar. The project is maintained and operated by the National Highway Authority (NHA).

Upgradation of D.I.Khan-Zhob Road (from the town of Yarik)

As a part of the China Pakistan Economic Corridor, the restoration and upgradation of the N-50 section will be carried out from the town of Yarik in DI Khan, Khyber Pakhtunkhwa. The existing 2 lane road will be upgraded into a 4-lane expressway in the first phase of construction and then in 6-way expressway in the later phase.

Thakot-Raikot N35 is a roadway based on two-lane between Thakot and Raikot, which is around 136 kilometres long. It runs over an area where planning and construction of several hydropower projects are underway. Diamer-Bhasha Dam and Dasu Dam are noteworthy examples in this regard.

After Karachi Port and Port Qasim, Gwadar is known as Pakistan’s third important deep seaport. Once fully developed and functional, the port city of Gwadar will become an international trade hub for Pakistan. Here are some of the latest developments in Gwadar carried out as a part of China-Pakistan Economic Corridor.

The development of the East-Bay expressway is underway. It is going to serve as the main artery for Gwadar Port through, which will significantly ease the flow of the traffic. The expressway will primarily connect the Gwadar Port and its Free Zone with the network of highways running across the country. Gwadar East Bay Expressway is planned as a 6-lane expressway, which will be connected with a 30 metres wide railway corridor, running across the 2300 acres of Free Trade Zone of Gwadar, linking with the Makran Coastal Highway (N-20)

The construction of New Gwadar International Airport (NGIA) is underway. The new airport will be equipped with stand of the art facilities and will have the capacity of handling larger aircraft like ATR 72, Boeing (B-737) Airbus, (A-300) and Boeing (B-747) for both domestic and international flight operations. It is located in the Gurandani area, which is around 26 kilometres northeast of the city of Gwadar in Balochistan.

The groundbreaking of the Free Trade Zone of Gwadar has already been done. As of now the area that has been allocated for the Free Trade Zone is around 2,280 acres. Framework for all the other infrastructure developments and transportation facilities in the area has been completed. According to a bill passed in the National Assembly in 2016, policies for the tax exemptions for Free Zone have been laid down and communicated. Some of the key benefits of investing in Free Zone include exemption on customs duties for operation and construction activities, 100% ownership for foreign investors along with flexible visa regulations. Such benefits will attract more foreign investors to set up their businesses in the region.

CPEC projects to strengthen railway network in Pakistan are as under:

Mainline-1 (ML-1) is one of the most important CPEC Projects in Pakistan. The project also includes an overall infrastructure upgradation of Karachi to Peshawar railway tracks, which are around 1,680 km long. Once completed, the project is expected to reduce the travel time between the two cities to half.

Havelian Dry Port Cargo Facility is being developed to fulfil the demand for the freight traffic of the trade routes of Pak-China Economic Corridor. As per the masterplan of the project, a dry port will soon be constructed at Havelian on the railway land. The dry port will act as a container terminal for the freight traffic coming from the route of Karakoram Highway and other important intercity road links. The project’s estimated cost is around $65 million.

Orange Line, Lahore, which is Pakistan’s first-ever electric railway mass-transit system has completed its first trial run, which was recently held on December 10, 2019. These trains can travel up to the maximum speed of 80km/h with a capacity of carrying around 250,000 passengers each day. The projected is expected to be completed by March 2020.

The fast-track development of Special Economic Zones (SEZs) in Pakistan will significant boost the influx of socio-economic opportunities. Some of the major SEZs proposed under the banner of CPEC are as follows:

Located in the center of the region’s major urban centers of the region, Rashakai Economic Zone is a platform designed for the economy to prosper in the region. The total area designated for Rashakai Economic Zone is 1000 acres, which will be developed in the next five years in three phases. It will include around 702 acres allocated for industrial use as per the regulations of the Federal Government, out of which around 159 acres will be worked upon in Phase 1, 279 acres of land will be developed in Phase II and the rest of the 264 acres in Phase III. An area of 76 acres has been designated for commercial use.

The Government of Sindh has undertaken another groundbreaking project according to which 1530 acres of land will be developed as Dhabeji Special Economic Zone in Thatta, It is one of the most important projects, which are being carried out under the banner of China-Pakistan Economic Corridor (CPEC). Some of the key infrastructure facilities include Captive Power Plant, Technical & Vocational Training Centre, WasteWater Treatment Plant, Warehouse/Logistics Park, 5 Star Hotel, Business Center, Fire Station/ Emergency Response Centre and Auditorium/Expo Center.

Note: To expedite and monitor the development of all the above-mentioned processes, the China-Pakistan Economic Corridor Authority (CPECA) has been recently formed by the government of Pakistan.

How to Deep Clean Your Home After a Household Illness 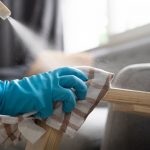